This is part of a chat I had with Hugh Lovel.
HL      I’ve long thought Russel and Tesla had something to offer from their viewpoints, but even if you knew their definitions of electromagnetism I don’t see where that gets you in regard to Life, Consciousness or Wholeness, which I see around me and inhabit every day since taking on life in this body. To me a theory of everything has to explain Everything, not just the physical and not just the physical and the plant side of biological. It has to explain awareness and spiritual values. Your explanations of the astral and egoic realms leave Tesla and Russel in the dust, and I’m impatient with those who got stuck there. Thank you very much for venturing so far ahead of prosaic thinkers. With your diagrams I think we can finally talk about awareness and values. But if so, if your diagrams really do depict the big picture that ties it all together, then physical isness, life, awareness and values all four spring from  the same origin. As humans we have this origin within us, but it also is the origin of the entire universe and to varying degrees this origin is within many of the things in this universe. Defining this as electromagnetism and scalar dielectric baffles my imagination.

GA EM and Di E are the ‘physical’ carriers of the activity. They are the cars upon which the Spirt moves. Sort of like saying how is it possible for the Spirit to use Hydrogen to manifest its presence…its just the carrier of the vibe at the physical atomic level…… 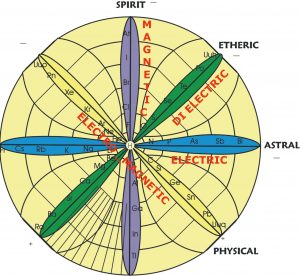 ‘The Electronic Being’
My understanding of awareness and values etc is they are the end product , not the beginning. I doubt very much that a electron ‘in the static field’ has any consciousness at all. Creation begins once this electron moves and polar charge begins to build. The physics of the ‘electronic being’ then leads to increasing complexity of ‘golden mean’ order, which leads eventually to the ignition of a star. This is where organisation becomes more intense and  energy ( and atoms) is now produced and expressed outwards, rather than being simply organised. I can imagine that this then becomes a ’spiritual being’ in its own right. However as for its ’self awareness and consciousness’, though, we can only speculate. Does it need awareness?  It is ‘expressing intention’ , albeit even only physical energetic force moving through space. This is a star frequency, and the constance of this frequency sets up ’standing waves’ of activity, as it interacts with other star and planetary forces. Given everything is running on the golden mean, there is all sorts of ‘coherences’ and intensifications taking place. As these are received by the Earth and reflected back outwards,  we see we have lifeforms manifesting as a result. They begin simply and then they grow in complexity, through the various kingdoms. Kolisko shows us how the bodies are increasingly wound in through the animal species, until we have Humans were we see ’self awareness’ possible for the first time. This is achieved when the unconscious Star force frequency finds its full incarnation as Spirit, within the Human. Now awareness and values can be expressed, as a final expression of the process of movement, which has used electronic physics as its vehicle. The Stars ’spiritual being’ may have had full awareness and a grand plan, but this is NOT the phenomena in front of us. This is fanciful speculation . The phenomena is that we are the only self conscious beings in the Universe. We are the only things with values, morality, objectivity and relative ‘freedom’ ( once we understand Astrology) That is why Spirits want to incarnate here…..this is where it is possible for the Universe to be aware of itself. Self awareness is the end product, not the beginning. It may even be true, to say that any ’self awareness’ that the Universe has, has come from what the dead humans have bought back to it…….. This anthropomorphising of the Universe, people go on with , giving it some huge pre existing plan and intention is delusional. Look at the phenomena……..see how self awareness is a rare thing amongst humans, it comes as the cherry on top of ‘a life well lived’. Yes we can say, in my diagrams, clearly identifying the Stars as the primary formative forces, which through their journey through space, and the Earth, manifests as what we call Spirit, and provides for a place where we can eventually talk of consciousness, values and morality , but only when it manifests at the end of its journey, in the Human. It starts as a frequency of motion, and has many transformations and intensifications to become finally, an expressed moral value. I like the way Dan Winter describes these intensification processes. Yes values are transformed star forces, but there is a huge journey ‘of physics’ been undertaken in between these two.

What do electromagnetism and scalar dielectric mean in terms of life, awareness or value? Sorry, I don’t get how these terms have anything to do with physical isness, ether, astrality OR egoity.

GA My Electronic Being picture, has the rings of the cosmic spheres in the background. The electronic being is what happens when something / anything spins. This is the internal dynamic of everything. The polarity of the magnetic and electric drives it into further motion, and from this activity arises what we identify as EM and DiE activities. These are secondary activities. Stop the spinning and these collapse.  The EM effects all the physical matter, while the Di E effects all that you try to describe as the Ethers, and what quantum physics is trying to describe. These activities however are embedded in the Cosmic spheres, the stars, planets atmosphere and Earths magnetic field. These outside forces play into the electronic being. The EM reacts to the physical EM forces of the Universe, while the more subtle Di E activities created by every spinning object, which RS called the Cosmic Ether’, is received and responded to by the DiE within the single ‘electronic being’.

I mean the corpus, the life, the awareness and the values I experience as me. If you are going to lay claim to a theory of everything, it needs to deal with everything that I am or you are or anyone else is. I’ve heard this referred to in other contexts as enlightenment, sammadi, self-realization and so forth, but you are the first I’ve encountered who called it electromagnetism. That’s really original. A+ and go to the head of the class, Glen. Now if you could just explain what you mean?

GA I hope the above has explained this. Just as the strong nuclear force / which is a harmonic resonance with what we call Spirit, at an atomic level /  is ‘congealed electricity’ (RS), so is what we call incarnated Spirit / enlightenment. It is condensed, intensified, entwined, enfolded star frequencies, bought to its highest expression within the Human .

I am sure I am not the only one saying this by the way…….

This is the point. In nature everything works seamlessly together as one–physical, etheric, astral and egoic. All work together as one. Let’s take the ethers. Each ether is implicit in the one preceding. So the warmth ether, or time, implies space, which implies motion which implies integrity. You can’t have one ether without the rest, though you can build warmth, light, tone or life if you so choose.
We could take the astrality, but we would be getting a little more complicated with what’s going on with astrology. The picture there is the Heavenly Fields and the Great Beyond inform us through the constellations of the ecliptic, which is the equatorial plane of the Sun. This information flows through the outer planets’ warmth and flows through the earth and inner planets to the Sun, which transforms warmth into light for the most part (there are coronal mass ejections). Each ether is implicit in the one preceding. Light, streams back from the Sun, through Mercury, through Venus to the Moon which tones it down to what goes on in water before this musical medium is imparted to us, here in the earth’s biosphere. But in the process of this information a lot more than fire, earth, air and water are formed. Carried on this stream as implicit within it is awareness, sensation and desire, to say nothing of integrity and values.

GA Where is the proof that this ‘awareness, sensation and desire, to say nothing of integrity and values’  is manifesting as that, at that stage of the process. Yes forces that will become those things are present, but not as those things, only as a frequency, that later transforms into those things, when inside the Human.  When RS talks of the Cosmic Ether, he talks of  ‘all the forces from above’, which includes forces that later show up as the human Astrality and Spirit. At that stage they are not the Human astrality, but rather the frequency upon which the Human astrality later manifests.

The ethers show their working in plants and the physical elements that plants are able to work with.

GA But remember the plant Astrality and Spirit are just as active and important as these ‘lower’ activities. They actually drive anything you see as a Ether activity. It is the Spirit / star forces that is driving the warmth ether etc. Hence why this Etherite world view is a part truth.