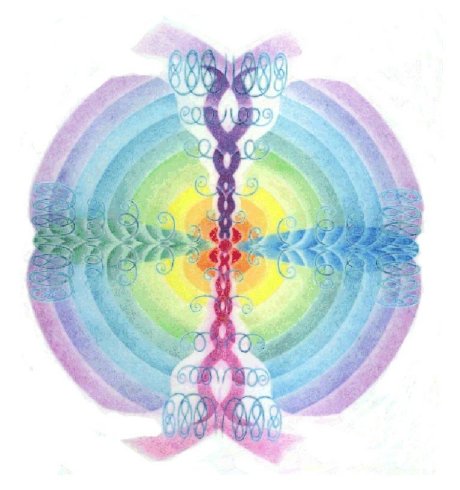 This picture is the end product of many hours of imagining and synthesising impressions from Astronomy, Astrology and Rudolf Steiner writings on Agriculture and Medicine.

Astronomy tells us that many organised cosmic bodies, from galaxies, our solar system and even the Earth manifest due to the physics of gyroscopes. Essentially this theory says a central spinning object , be it a black hole or a Sun develops a vertical axis made up of two vortexes. One above the centre and one below it. These vortexes sucks in cosmic matter and gases into itself. For the Earth we can see these vortexes active in the development of the aurora. The colours of the aurora are created as different elements from the solar wind are sucked into the pole vortexes of the Earth.

In the case of galaxies and solar systems ,these cosmic inputs are then squirted out along the horizontal plane. 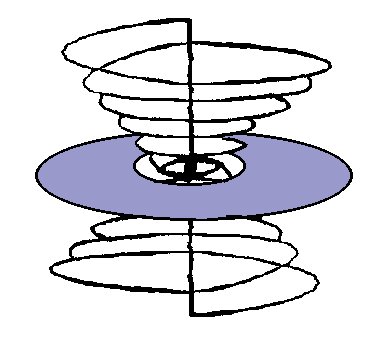 Due to the immense electromagnetic and nuclear forces created by the activity of the centre, this substance organises itself in according to the nature of the electromagnetic fields. In the case of the solar system this matter is accumulated and centralised into the mass of the planets.

Steiners medical lectures, most notably in “Fundamentals of Anthroposophical Medicine” (ISBN 0-936132-80-9) show how this same basic process is responsible for the energetic development and maintenance of the human physical body. Further investigation into his Agriculture lectures (ISBN 0-938-250-37-1) reveals he has outlined the same structure for plant growth and the energetic working of the alive soil. He goes further to suggest the four major spiritual bodies he outlines work according to this structure too. The vertical pole sees the Spirit/Ego (purple spiral) in opposition to the Physical body (red spiral). Along the horizontal plane eventually the Etheric body (green lemniscate) 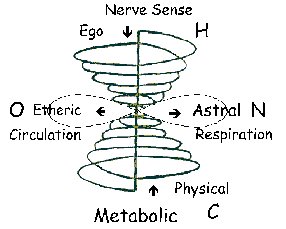 forms as a polarity to the Astral body (blue lemniscate). It is the harmonious working of these four bodies which ensures healthy manifestations within all kingdoms of nature. The Garuda Biodynamic Institutes task is to find ways of restoring this spiritual harmony whenever physical disharmony in nature occurs.

The squiggles
Throughout Steiners work, he describes the activities of these bodies as manifesting according to a set of cosmic laws. These can be represented by the number of players in each law. These are commonly called the 2 fold -duality, 3 fold – physical body, 4 fold – etheric body, 7 fold – astral body and 12 fold – spirit/Ego, levels of life. This number series is the same one used in ancient Astrology. 2 fold -Polarity, 3 fold – Modes, 4 fold – Elements, 7fold – Planets and 12 fold -Zodiac. One step I have taken is to attempt to join what Astrology says about these laws and what Steiner has said about 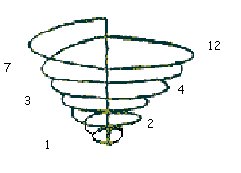 them. Another has been to place all these levels on top of one another and see them as part of a creative spiral of life (diagram to be placed here later), rather than individual unrelated parts. This step helps us (me) to establish clear relationships between each level as well as between the parts of each level.

In this picture you will note there are twelve layers from the centre of the picture (red) through to the outside purple layer. As we move away from the centre to the periphery we move up the spiral. This is imaged by the ‘squiggles’ which represent the activity of the body spheres as we move outwards. Another representation of this is my “Layers of Creation” diagram placed below this section.

A sub plot of this is the suggestion that within each major body axis we will also find the activities of the other bodies becoming active as secondary influences. This is often a consideration which needs to be made when dealing with specific problems such as the spiritual nature of a virus or fungus and the site in which it begins to cause trouble.

The simplest interpretation of the ‘Apple of Life’ is to suggest it is an archetypal representation of the energetic, electromagnetic and spiritual fields responsible for the manifestation of matter along the horizontal axis of any manifest being.

A high quality A4 reproduction of the first picture is available for NZ$20.00 plus postage.

Back to Main Page