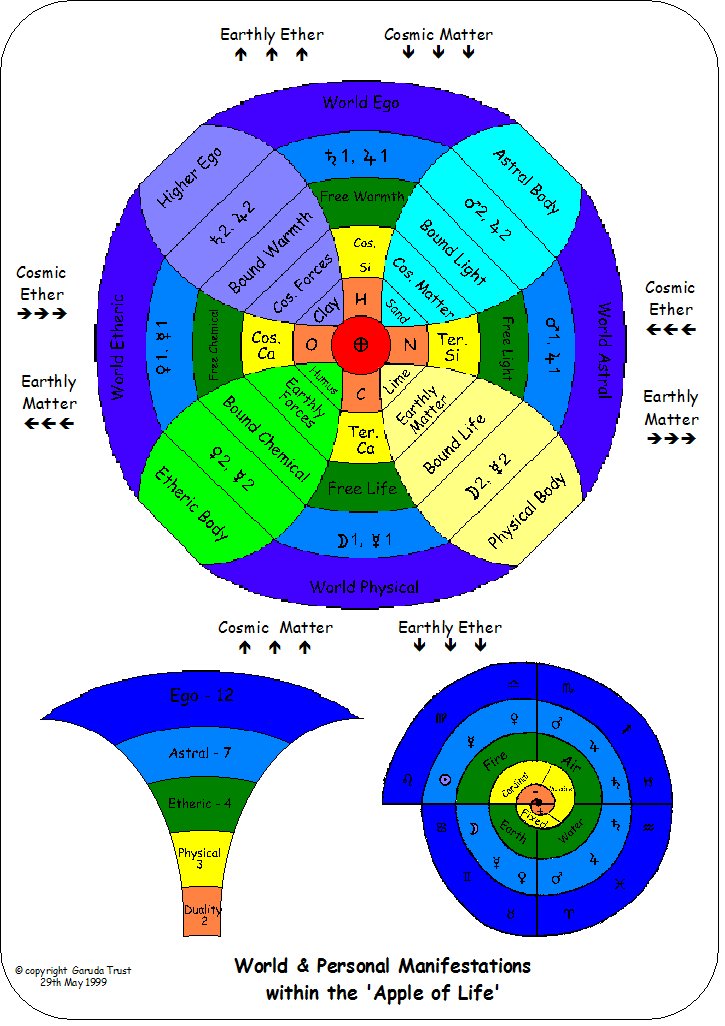 In my earlier writings I have attempted to convey the picture of creation being organised according to a multi layered gyroscope. This diagram is the closest I have come to date to illustrate this picture. There are a few ‘ideas’ expressed therein which could do with some explanation.

The basic gyroscope arises in the same way a galaxy, star or planet arises. Due to the spinning motion of a hydrogen atom, a speck of dust or a water molecule, a electromagnetic ‘being’ arises, whose form is based around a vertical axis of two vortexes. This vertical axis sucks forces and matter towards its centre, where they are condensed before they are squirted out along the horizontal plane, where the matter of these structures accumulate. In keeping with all electro magnetic ‘beings’, this ‘cosmic apple’ manifests in a multi-layered manner. Astrology and Steiner describes this as having six primary layers. Imagine an apple with six onion rings inside it and you have it.

The diagram on the bottom right corner shows the inward moving spiral we live within. The Galaxy – constellations, to the Solar system – planets, to the Atmosphere – elements, to living physical forms – modes, to Polarity – sexes, to unity – Earth. The diagram on the bottom left is describing the same phenomena as we visualise looking down one of the vertical vortexes, from the outside into the middle. ‘Biodynamics Decoded’ outlines how these layers of the Cosmic vortex are the macrocosmic homes of what RS calls the World and Cosmic spheres of the Ego , Astral, Etheric and Physical layers of creation.

In many of RS writings we are presented with the concept of the spiritual bodies organising themselves within the ‘cosmic gyroscope’ according to two sets of polarities. The vertical pole consists of a duality between the Ego and Physical poles, while the horizontal plane is maintained by an interaction between the Etheric and Astral poles. This gyroscopic cross is the essential external harmony which needs to be created before ‘life manifest’ can come into form and be maintained. RS presents how living creation is an internalised manifestation of these cosmic external ‘laws’. He stresses often that if we wished to understand manifestation we must understand this connection between what is essentially an outer and inner set of corresponding realities. This is “As above, So below” as you have never seen it before.

If the external reality is expressed as the gyroscopic arms, then it follows that the dynamic spaces in between these horizontal and vertical axis, would be the place to characterise the internalised levels of manifestation. I like manifest life appearing in the spaces between the external gyroscope arms, as it suggests life is a very dynamic and fragile space which changes according to the movements and condition of the primary external world and cosmic spheres.

An essential process, as hard as it is, with the Agriculture course is to understand which term RS is using , what level it relates to and how it relates to the other terms he has used before and after it. One can attempt this with a glossary of terms, however I have found this a near on impossible task and find these diagrams the best way to achieve this goal.

This my friends is but a start. Place this diagram on your wall and refer to it as you read RS and ‘Agriculture’. I offer it as a gift in the hope it helps bring some conceptual order to an otherwise complex maze of terminology, concepts and pictures we are thrown into, by entering into a translated version of an advanced lecture series, given to specialists at the every end of a long mystical life, filled with 6000 previous lectures. It is a wild call and all power to you for taking up the challenge of stretching your being to accommodate the wondrous image of reality and practical alchemical suggestions contained within. There are few grander journeys to be taken on this planet, Earth.